Regional Cooperation Magazine
Home News “A youth club would be an important part of the village” –... 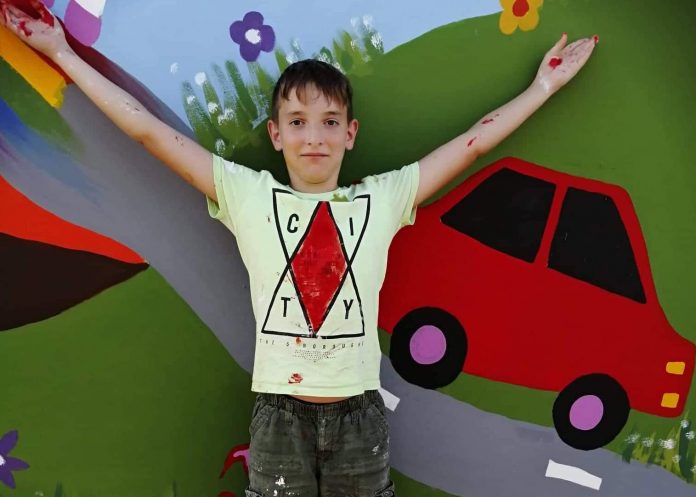 Zsombor Sipos is one of the people involved in the local community orginizing work of our project “Reclaim Our Civil Space!” The project runs in 8 countries in Central and Eastern Europe, and while the local coordinators always respond to local needs, these have one thing in common: they support the creation of a civic space, where people take control of their own life and live up to their potential. Zsombor is 15 years old and lives in a village called Kölked in Hungary, where a strong local community has been formed with the help of Ökotárs Foundation’s community organizers. Zsombor has plans to make the village a better place for the young people who live there.

Tell us about yourself!

My name is Zsombor, I am 15 and I go to the Kisfaludy Károly Secondary School in Mohács, Hungary. I am a ninth grade student and I dance in competitions. I got involved in this programme when Kriszta (the local community organizer) organized a wall painting camp in my village called Kölked. We painted the bus stop walls. I liked the community there, so I thought I’d join in. That was in 2019, I’ve been doing it ever since. We’ve already held a video making camp, young people from Dunaszekcső came and helped us to get to know the equipment, the settings and how to be and what to do in front of the camera.

What kind of issues do you deal with?

Mostly how we can develop the village. Kriszta used to bring videos of people from other communities who have helped in their community. The group and I agreed that there are things in Kölked that could be improved. Now we want to start a club for the youth here. We would like more young people to see what we do. Here in Kölked there are not many places where young people can come together and have a chat or play something, so a youth club would be an important part of the village.

Why did you decide to get involved?

Because of the people here. I like to be in company and I feel I have a connection with others. At first I thought I was just going to paint a wall, but I’ve grown to like it even more.

How has this program helped you?

I got to know other people, learned about them, and now I can connect with other people better. I learned how I can help the village to make it a better place. When we painted the bus stop, it was in a very bad state. Then a lot of young people and adults came there and left their handprints on the wall. It turned out very nice and hasn’t been graffitied since.

As a 15-year-old boy, what are you most afraid of?

That this community will ever fall apart.

What do you think it’s like to be young in Hungary today? And in Europe?

I think it must be harder than it used to be. The Covid has really hurt young people. We couldn’t meet. I asked my parents what their childhood was like. They told me that they lived without electronic devices, they could meet and play whenever they wanted. It could be like that now, but unfortunately it is not. And I don’t think it’s different anywhere else.

What would you say to young people who are in the same situation as you were before you joined this community?

If there is such an opportunity, if you can meet others, do it. Try it, don’t wait for the next time. It won’t hurt if one is not obsessed with their smartphone screen, but meets people, gets to know others, talks to others.